February 10, 2021
The Seventh Seal is a film by Swedish director Ingmar Bergman released in 1957. The story takes place during The Black Death, which devastated Europe during the fourteenth century and killed between twenty-five to fifty million people; the movie captures a portrait of death and it’s looming presence in the lives of Europeans of all ages, classes and religious beliefs.

Ingmar Berman’s film is shot in black and white, though it might have been due to the slow emergence of technicolor in motion pictures during the period, the high cost or technique required to process color in films, The Seventh Seal is better told through the visual duality of shades. The film begins with a knight, Antonius Block playing a game of chess with the personification of Death. At the end of every game of chess there will be a clear winner and a loser. Death will definitely win one day, for nobody escapes it; the question, therefore, is When will death win? In the film, Macario (1960) which takes place during the Day of the Dead celebration in Mexico, for example, the main character is visited by Death and as a means to forestall the inevitable, Macario offers Death food and makes him his companion throughout the film. Life, then, is a constant game with death; there are days when it seems as if we are victorious and death seems distant and weak over us, yet there are others when death appears to bring us closer to our inevitable destiny. Death plays with the minds and hearts of knights, bishops, kings and queens; it plays them like pieces of chess.

Later on in the story, the knight and his squire come across a small church, inside which a man is painting a fresco of the Dance Macabre (The Dance of Death). This is another way of representing the manner in which humanity “dances” with death, or rather, the way Death dances with humanity. “Why paint such daubings?”, asks the squire. “To remind people they will die”, replies the painter. The story is trying to bring to the forefront our imminent mortality. During the Black Death people were inevitably confronted with this reality at every moment. Death was everywhere and its presence provoked people to face their own conscience and the state of their soul. This is illustrated a few moments later in the movie when a crucifix of a blood-stained Jesus moves Antonius Block to reflect on his own inner state. He speaks to the being on the other side of the confessional; however, the introspection is so deep and personal that one could confuse it with a soliloquy:

I want to confess as honestly as I can, but my heart is empty. And emptiness is a mirror turned to my own face. I see myself and am seized by disgust and fear. Through my indifference for people, I’ve been placed outside of their society. Now I live in a ghost world, enclosed in my dreams and imaginings. 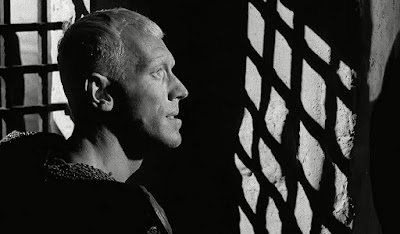 What Antonius hasn’t realized yet is that the one listening to his confession is actually Death itself who then asks Block, “Despite that, you don’t want to die?” To which the knight replies, “Yes, I want to.” Antonius Block is already on the brink of death; he has alienated himself from society by placing himself above people. He is indifferent to others, he has forgotten how to love life, he has lost his faith, and is lost within himself. In many ways, Antonius is already dead, or rather closer to death and far from living a full life. Ironically, the presence of death in our life also makes us question the presence of God in the midst of much suffering. Such is the case with Antonius when he says:

Why does [God] hide in a cloud of half-promises and unseen miracles? What will happen to us who want to believe but cannot? What about those who neither want to nor can believe? Why does He live on in me in a humiliating way despite my wanting to evict Him from my heart?

The Black Plague, like the Coronavirus Pandemic in our modern time has drawn humanity to question the presence of God in our life. We have been forced once again to look at the state of our soul, to reexamine the way in which we live our faith in Him. On the other hand, other people have gone about their lives as if they are immune to death. A man in one of the scenes of the film invites those present in the tavern to “Eat, drink and be merry!” In the face of so much lifelessness, some people choose to recompense with such a false happiness. 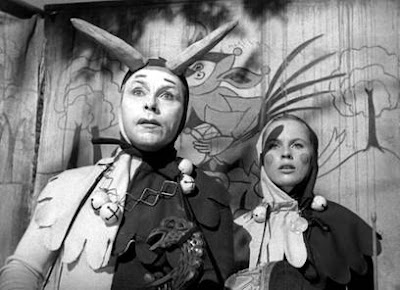 The film also follows a married couple who work as actors. Jof, Mia and their child Mikael are a loving, joyful family who counterbalance the dire drama of the plague. They are a type of Holy Family: Joseph, Maria and child Jesus. In one of the most interesting scenes of the movie, the actors are in a small town performing a parody of death and the plague. The audience is unimpressed. Jof and Mia, then, sing a song to the personification of the Black Death:

As they perform the song on stage with clown-like gestures, the actor-manager Jonas flirts backstage with a female fan. She lures Jonas by biting down on a piece of chicken; it’s a carnal metaphor for sex. He unashamedly falls for the advance, walks over to the chick and nibbles on her limb. As the song plays in the background, the hot-smothering couple thrust through the bushes to pleasure each other.

Back on the main stage Jof and Mia’s act is interrupted by a real-life performance – a group of flagellants process through the townspeople. A larger than life-size crucifix, incense, chant, the beating of a slow-rhythmic drum, screaming, wailing, and sounds of whipping bring the townspeople to their knees. The drama of the scene induces tears in some and bewilderment in others. The melodramatic performance has captured everyone’s attention; when death enters our life we have no choice but to pay close attention. “Yes, you will all vanish by the Black Death”, yells a priest... “Do you know, you confirmed idiots, that you are all going to die?” The priest is not just speaking to the crowd, but to us as well. “Lord, have pity on us in our degradation, but have mercy on us for the sake of Your Son, Jesus Christ!”, he pleads. After this prayer, the procession continues its way through the town and vanishes.

Death is an aphrodisiac; it lures us and entices our appetites. We claim to be afraid of death but are constantly inviting it into our life; we are attracted to it more than the most carnal pleasure. As the painter in the church said, “A skull is more interesting than a naked wench.” 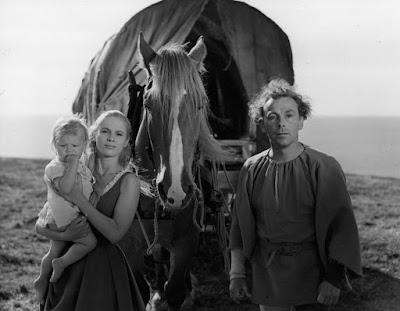 All the world’s a stage and we are but actors. One day the story of our life here on earth will end and death will seem to have the final word. We cannot beat death, no matter how good of an actor or chess player we may be. Death is as we see it; it has no secrets, it is unknowing. Death seems more present than God and this provokes us to reflect constantly on our purpose and destiny. As Christians, however, we know that though we cannot see Him with our eyes, God is present in us. Those who believe in God cannot escape death either but can rejoice in the idea of the afterlife. A pure and innocent soul is witness to the miracles of God here on earth; it can see the goodness in the world and in others; a pure heart is witness to the love of our Holy Mother and rejoices in the laughter of the child Jesus. If we are humble and poor of heart, we will be able to dance with death and take pleasure in the fact that death does not mark the end of life, but the way to everlasting life in heaven.