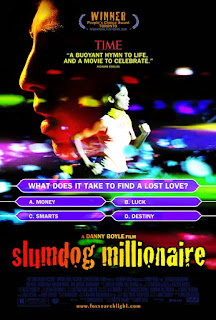 Around this time every year, I always run out and watch as many Academy Award-nominated films before the big ceremony. I love to sit in my living-room the evening of, and cheer on the films I want to win the eighty-one-year-old, bald, gold Oscar. This year, I was quite disappointed with myself when the Best Picture award was handed to Slumdog Millionaire because I had yet to see it. I really did not think the film would win Best Picture, but then again how would I know if I had not seen it yet, right?

So today, I looked through the Calendar section of the Los Angeles Times and found that Slumdog Millionaire was showing at a local discount-I mean, Independent Theatre (for $4.00). I opened up my wallet and found a five-dollar bill (just enough to watch the movie and to buy a Kit-Kat chocolate bar at the corner liquor store before the show).

After the film, I practically walked out of the theatre scratching my head. Was what I just saw - was that an Academy Award winning film?- It was Slumdog Millionaire that won the Academy Award for best picture, right? Don't get me wrong, the film was not bad. I was glad to see a film that dealt with real-life issues that many Indians face every day. It is heart-breaking to realize that so many children have to live in the streets and labor over food at such and early age (an unfortunate fact also found in many other underdeveloped countries around the globe), and that families are torn apart due to religious indifferences, intolerance and violence.

One of the most captivating moments for me was when the story takes us into the offices of an outsourcing service company and shows the hunger in the young adult workers who desperately want to be on Who Wants To Be A Millionaire? Of course, this hunger is shown throughout the film explicitly and literally through the young children working in the streets, wanting to buy fruit. But somehow we see that this hunger (for food and for economic prosperity) continues up to and through their young adult lives.

The other captivating moment is found towards the end, in a split montage between Jamal and his older brother Salim. Jamal reveals that he wants to win the grand money prize, not because he wants the money itself, but because he thinks the wealth will allow him to win over Latika. When Latika answers her cellphone, Jamal realizes he has already won her over with or without the twenty-million rupees. As destiny would have it, however, Jamal wins the money anyway. At the same time, Salim has filled up a bathtub with "dirty" money (money obtained by working with a crime lord), shoots Javed (his former boss) and allows himself to be killed. The story tells us then, that the "true millionaires" are those who obtain money, not selfishly or illegally, but out of pure selflessness.

Though the story was fascinating and moving, the actual film was not satisfying. I only saw one camera shot I enjoyed and was not intrigued by Dev Patel's acting. I have seen other pictures by Indian filmmakers, for example Satyajit Ray's Apu Trilogy (1955-1959), and Mira Nair's The Namesake (2006), and do not think Slumdog Millionaire is as great a film as these others. I believe (since I am definitely not a member of the Academy who voted for the film) that there is a lot for me to learn from the film. Until then, I will keep trying to understand why this film won best picture and hope that I do not come to the reason I hate to admit - that it makes the United States' temporary economic woes look minimal when compared to other countries' habitual economic angsts.