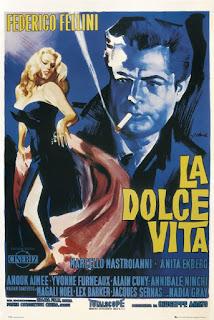 After work on Saturday, with the aroma of plátanos fritos, moros y cristianos, and ropa vieja still roaming under my nose (I work as a waiter in a Cuban restaurant), I snuggled on my living-room couch and popped in the famous Italian film La Dulce Vita (1960, director: Federico Fellini) into my Panasonic DVD player.


I had heard the film referenced many times before on television shows, other films and plays, but never understood what the hype was all about. If you have seen the film, perhaps you would agree with me that the black and white cinematography is astonishing, the actresses Anita Ekberg and Anouk Animée are gorgeous, and the actor Alain Cuny delivers a profound and memorable performance as the character Steiner. The trouble I had with the film, however, was the story line. Honestly, I was lost! As it turns out, many critics in 1960 were also. With a little curiosity and some outside research, I found a website that provided me with some valuable insight on the film:
http://www.culturevulture.net/Movies/LaDolceVita.htm .

After viewing the film, I opened up an arroz con leche I had brought home from work and dug right in - now that's la dulce vita.