Skip to main content
October 03, 2009
POMPEII AND THE ROMAN VILLA 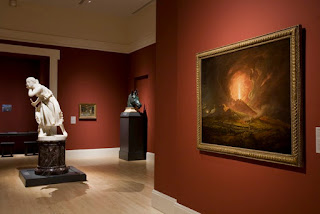 On August 24 in 79 A.D., Mount Vesuvius erupted. Smoke, mud, flames, burning stone, ashes,and poisonous gases bombarded the region of Campania, Herculaneum and Pompeii, killing thousands of inhabitants and burying them under layers of volcanic debris. Centuries later, archeologists have excavated numerous artifacts, such as statues and about one thousand ancient papyrus book rolls. Much of Pompeii remains unearthed.


The Los Angeles County Museum of Art presents an exhibition that highlights the art and culture of regions around the Bay of Naples: Campania, Herculaneum and Pompeii. Here, one finds an elegant display of one hundred-twenty works of sculpture, painting, mosaic, and luxury arts.


Some works demand attention, such as the statue Aphrodite, whose tunic-folds cascade

over her voluptuous body and reveal her well-rounded bosoms. Other works are more modest, but still demonstrate fine Roman taste, such as the The Three Graces, and Dionysos with kantharos and Maenad (these might have once formed part of larger wall paintings, so common in Roman homes).

When one steps into the room which displays the fresco Moregine Triclinium (“Moregine Dining-Room” in Latin), one cannot help but imagine what an evening in su

ch a room might have been like: reclining on an elegant couch, plucking oysters or olives with your fingertips, while listening to the poetry of Horace or the strumming of the lyre.

The last section of the exhibition presents works inspired by the infamous eruption of Mount Vesuvius. Two such paintings are: Eruption of Vesuvius on 24 August AD 79 During the Reign of Titus, (1813) by Pi 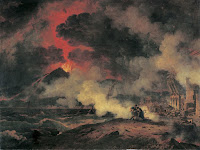 erre-Henri de Valenciennes and Faithful unto Death, (1865) by Sir Edward John Poynter. The latter was inspired by Edward Bulwer-Lytton's book, The Last Days of Pompeii. Both paintings explode with drama and suspense.


Truly, the collection is magnificent; I waited months to experience it and am delighted I finally did. The ambiance was perfect and screamed for a glass of vino rosso - pity drinks are not allowed in the galleries!