Man Down, Critic Out

Off to the movies...

Sometimes when I have an urge to go watch a movie at the theaters and I’m not sure which to choose I like to visit rottentomatoes.com to see what’s new. Shia LaBeouf’s film Man Down caught my attention, so I decided to read what the “critics” were saying about it. When I came across the reviews, however, they were mostly negative: 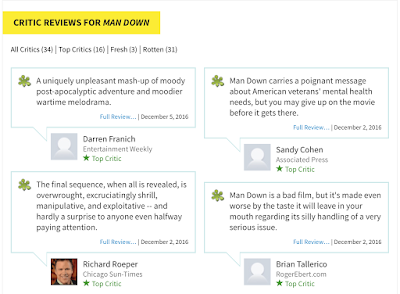 Yet, when I read the Audience Reviews, I was surprised to read something completely different: 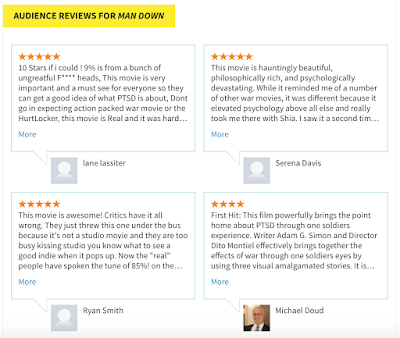 I asked myself which of the two reviews I should value. Surely the critics know way more about films than the average person, I thought. Then again, most moviegoers are just as critical of a film they don’t think is worth their time and money. I was in a dilemma because Man Down was the only movie I really wanted to see, mostly because Shia - who is a fantastic artist and actor - was in it. Surely he couldn’t let me down, could he?

They only way I’d know for sure if I would like the movie is if I went and watched it myself. So I did. I bought my ticket online so I didn't have to wait in line or deal with a sold out show (which lately has been happening to me). 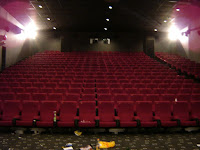 I arrived at the Edwards Alhambra Renaissance Stadium five minutes after the show time, but when I walked into the theatre I was surprised to be THE ONLY LIVING SOUL IN THE ROOM! So far, the critics were winning.

I began to doubt the film more when the trailers that played before the film kept getting worse and worse. I should know better, but I almost gave up on Man Down before it even began.

And then there was Shia 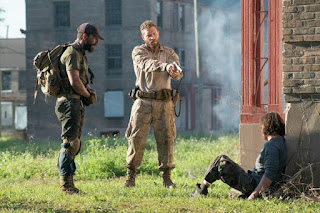 There’s a sensation from the beginning of the movie that this film is different. I knew beforehand it was an independent film – meaning it didn’t count on a budget close to that of other Hollywood films. One could say that the eerie feeling of loneliness throughout the film could be due to the fact that there wasn’t enough money to hire more actors (especially in the scenes that take place at the military camp), or invest in larger sets (exterior shots seem compacted and interior ones cramped). These are important elements in typical Hollywood films that moviegoers pay for (although we don’t consciously think about them). We pay a lot for a movie ticket and we expect a lot from our movie experience.

Everything that appears to work against the film, including what “critics” call a slow-paced narrative
and a cutting back and forth from one time period to another, is actually used to support Gabriel Drummer’s (Shia LaBeouf) emotional and psychological state. Drummer is the center of the story, the driving force in the lives of the characters that accompany his life, such as his wife Natalie, his best friend Devin, and his charismatic son Jonathan. All of the elements in the film work to help us the viewer visually understand Drummer’s inner world. Perhaps we’re used to experiencing difficult emotional and psychological dilemmas in different ways, but that doesn’t mean Drummer’s way is wrong. After all, once we discover why Drummer behaves that way he does, common folk like you and I couldn't possibly relate or even come close to understanding what it feels like to be a Gabriel Drummer. 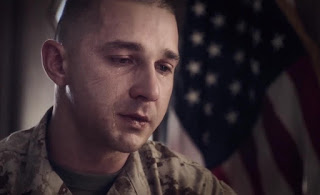 What I’m saying here is that the critics are wrong this time! The story is not only great, but it’s one that every American should watch. If we fail to watch this movie and understand this story, we fail as humans, as a society, as Americans. A critic’s goal is to influence moviegoers (otherwise who the hell would care what they write), but if a critic cannot see the tragedy and beauty in a story like Man Down then he or she should dedicate its efforts to another profession, for filmmaking is a form of storytelling, at best an art form, and as such invented to examine, understand, and come in contact with the human experience. Films– regardless of the budget – make us more human, but whoa, what a tragedy it is when a so-called film critic cannot reach beyond the exterior elements of a film to grasp the soul of a story or character.

There are few characters that have the depth that Gabriel Drummer has. This is in one part due to Shia LaBeouf’s majestic performance and another part to the legacy of the character he portrays, a war veteran who is in many ways an ignored hero in our society. Shia does justice to Gabriel and the many “Gabriels” in our country. 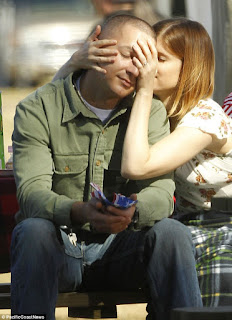 There are many moments in Man Down where Shia shines and they tend to occur when you least
expect them. Shia is not interested in outperforming another actor, but he does outperform himself. One soul-touching moment is better than the previous making Gabriel’s catharsis our own. When Gabriel sits on his bed and with tear-soaking-eyes stares at his wife, she begins to undress and asks, “Is this what you want?” As she is about to take off the last piece of clothing on her chest and approaches Gabriel, he pulls back quickly. With that one move and a facial expression full of unbearable emotional pain, Shia tells us that what Gabriel needs is a different type of intimacy; one that physical contact would never satisfy.


Shia projects emotion that I have never felt from a single character at once. He is a mix of solitude, Man Down exhibits Shia’s abilities as a true and authentic artist and humanitarian.
hurt, confusion, and love. To see Shia experience this sentiment publicly which otherwise one might feel in private, behind closed doors, is purifying. To think that Shia has chosen to represent Gabriel and his dilemmas and dedicated so much care, love, and humanity to him, demonstrates Shia’s sensitivity to chose characters that not only exist in the fictitious world, but also in our neighborhoods and families. Shia is out to bring attention and give credit to real-life heroes.


Don't believe what you read...except this blog

As a moviegoer, I want to be taken to places I have never been and live through moments like the ones in Man Down because movies are less about seeing and more about experiencing them. That only happens, however, when we are humble enough to allow a story to unravel in its own particular way, not the way we want or expect and as Gabriel Drummer teaches us in the film, life never ends up how we expect. - Edgar Avendano

Read all of the Rotten Tomatoes critiques for Man Down. Click Me.